Today, is a brief entry. I just found a very satisfactory answer to one of my everlasting questions about non-regression testing. Namely, as stated in this previous post, how is it possible to test internal classes while keeping all nunit test code in a separate project?
Well, there is an attribute from System.Runtime.CompilerServices, that lets you do just that. Let's say your test project is called TestSuite, then all you need to do is add the following line to AssemblyInfo.cs in the project under test:

Now all internal classes and methods are visible to the test methods in TestSuite. So you can do deep non-regression testing of an assembly and still present a minimal interface to your users. Pretty neat, isn't it?

If I am not wrong, this problem does not arise in Java. In Java, the notion equivalent to assembly-internal is package-internal. So even though junit code is in a distinct project, it suffices to declare it as part of the same package as the project under test in order to gain full access to all package-internal classes and methods.

As often, stackoverflow has it all: this answer originates from there. 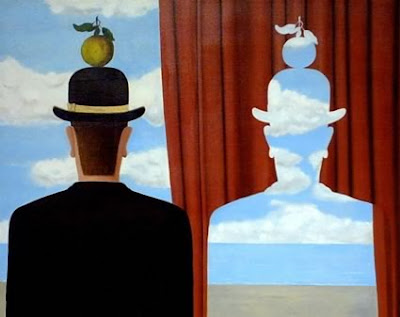 René Magritte, Decalcomania
Posted by Charles at 6:28 AM No comments: